As a nation, Pakistan is a far cry from where it started. Jinnah had famously said “You are free; you are free to go to your temples. You are free to go to your mosques or to any other places of worship in this State of Pakistan. You may belong to any religion, caste or creed—that has nothing to do with the business of the state.” However, will Jinnah recognize himself in contemporary Pakistan? These cartoons says it all.

When you think of Pakistan, images and terms which come to mind are failed state, frontline state, debt-ridden, sponsor of terror, a nuclear state, radical Islam and CPEC. When you look a little deeper, one finds the problem is deeper. It is a society in denial of their reality. Pakistan is in a state of permanent societal fracture. Every individual, organization and establishment is living in its own sphere, taking what it wants from the dysfunctional state. The State of Pakistan is a fig leaf cover for each one to do what he wants to do. That is what I have tried to capture in these cartoons and writings by opinion-makers within Pakistan.

The most hilarious event of the week was Pakistan publicly announcing that  TTP is sponsored by RAW. 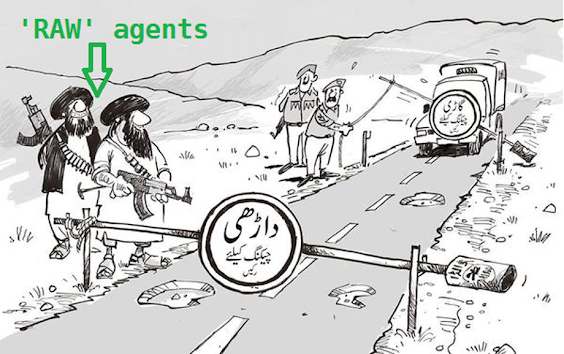 The new trendline of radicalism is blasphemy. People are being killed for blasphemy in broad daylight and the murderer is made a hero! By now Jinnah would be turning in his grave! Pakistan is a country where one should be careful to discuss religion – own or of anyone else. You could get killed for it. The judge, jury, prosecutor, and the victim are all the same and interchangeable. Khadim Husain Rizvi recently found that out. One day he was a firebrand cleric spewing jihadi and anti-blasphemy tirades who brought the government to its knees.. The next day he was dead. 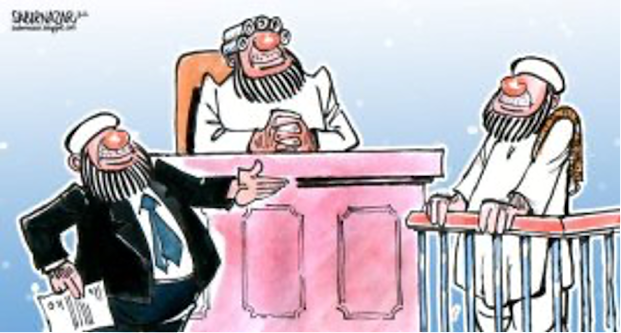 VERY recently, we witnessed the occurrence of two terrifying incidents of vigilante justice… both were carried out in the name and on the pretext of religion…the horrific murder of Imran Hanif, a bank manager in Quaidabad, who was gunned down in broad daylight by a security guard employed at the same establishment…This was not murder, he asserted, but an execution. His motive was pious — all he wanted was to avenge the honor of the Holy Prophet (PBUH). As word spread, a throng of people gathered around the killer. But, rather than decry the fact that he had taken another life, they showered him with admiration and praise…

Videos made shortly after the incident depict the murderer not being taken into custody but marching to the police station, boldly and defiantly. And he does not march alone. Escorting him is a whole coterie of fans. They are in thrall, it appears. One kisses his cheek, overwhelmed by emotion. Another caresses him, almost in awe, as though he is an object of reverence. As for the rest, they rally behind and around him, making videos and snapping pictures and chanting slogans..

… Most disturbing, though, is the muteness of the state. The incumbent government, while bemoaning Islamophobia globally and passionately championing the case for making ‘defamation of religion’ an internationally recognized crime, has here at home chosen to exercise silence in the face of such barbarity… Contrary to what some commentators may suggest, blasphemy is neither a colonial product nor a novel invention attributable solely to the Zia regime. The legal rationale for enacting and enforcing blasphemy laws in an Islamic state actually lies in orthodox interpretations of the Sharia.

Naya Pakistan is clearly living in La La Land. The actual Pakistan is stagnant which is directly attributable to a societal fracture. Pakistan is a nation which seems to be with a permanent Plaster of Paris cast on some part of its body being broken always or amputated. 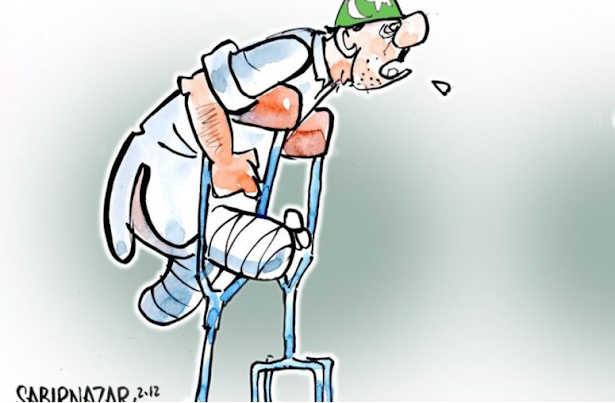 WHY do some states progress rapidly while others like Pakistan stagnate? The role of natural, physical, financial and human capital in this regard is clear. However, many analysts assign a key role to social capital too even if it is tougher to define, measure and show its links to national progress. Most define it as reservoirs of shared values, trust, cooperation, and reciprocity in society. Such reservoirs help reduce the costs of social, economic and political interaction among people and groups, enhance predictability and reduce the loss of resources in friction…..

All this leads to greater national productivity and hence faster progress. But their absence creates societal conflict and makes it tough to even accumulate physical, financial and human capital or benefit fully from natural capital…

Bangladesh, Sri Lanka and India have done better than Afghanistan, Nepal and Pakistan due to their fewer vertical and horizontal cleavages. Bangladesh comes closest in SAARC to being a nation-state. These three states also undertook land reforms. Finally, they have seen greater democratic rule than other SAARC  states. This has helped them build bridges of trust and cooperation across their natural cleavages…

If Pakistan has to have any hopes of making even limited progress like the three better-off SAARC states, it will first have to reduce their heavy political boot prints. The resulting political arena consisting of even mere procedural democracy, free polls and civilian sway will help Pakistan first accumulate social and then the other forms of capital needed to ensure progress. All grand plans to attract investment and build human and physical capital will keep floundering if social capital and political stability are not developed…

The Devil is in the Detail

All about political U-Turns and sucking up to Armed forces. If one thing is sure, it is that the Armed Forces will be the ‘State’. Politicians will continue begging the Establishment for survival. If politicians think that they can dare to dream otherwise, they will be turned into beggars. 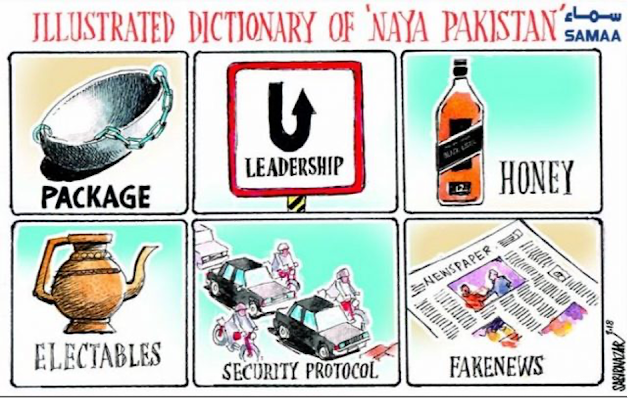 Our prime ministers get confused about geography and missile technology. And some of them defend not just U-turns but the ‘U-turn’ as a principle. Our civil society complains about judicial overreach and yet it petitions the judges to look into political matters, when offended by twists and turns of the madness called politics in Pakistan…

Clarity is overrated and contradictions are acceptable. No wonder then that all our politicians are busy proving who is the bigger patriot and defender of the armed forces, as they declaim their democratic credentials. The bigger the patriot, the bigger the democrat and well-wisher of the armed forces. And this is also why, democrats want civilian supremacy and rule of law but then blame only an individual or two. So what if history proves otherwise?…

… Moments in history can be made and unmade by men. And we are too busy unmaking it to be invested in any truths and any reconciliations.

A country with an University of Jihad whose story is published by a leading national daily has made a dossier on Indian Terror in Pakistan which is released publicly by the Foreign Minister of the nation! It is a worlds No1 University without a peer or competition. The Havard of Jihad! I am sure one of the post-doctoral candidates from this university has made this Indian Terror Dossier. If TTP has been funded by RAW as claimed by Pakistan then I must be the uncle of Nostradamus! 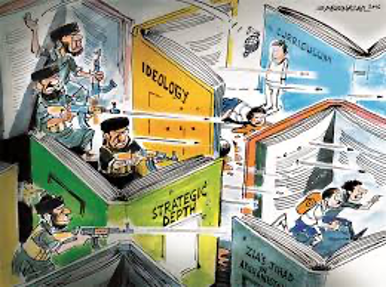 Maulana Yousaf Shah cracks a wide smile as he rattles off a list of former students turned Taliban leaders, revelling in their victories over superpowers on Afghanistan’s battlefields

….The Darul Uloom Haqqania seminary has churned out a who’s who of Taliban top brass — including many now on the hardline group’s negotiating team holding talks with the Kabul government to end a 20-year war…

“Russia was broken into pieces by the students and graduates of Darul Uloom Haqqania and America was also sent packing,” beamed Shah, an influential cleric at the seminary that critics have dubbed the ‘university of jihad’.

The sprawling campus in Akora Khattak is home to roughly 4,000 students who are fed, clothed and educated for free

Despite its infamy in some quarters, it has enjoyed state support in Pakistan, where mainstream political parties are heavily boosted by links with religious factions.

Rather, like elite western universities feeding new talent into corporate boardrooms and political parties, Haqqania’s contribution to insurgencies rests in the bonds forged in its classrooms…

Even the military has admitted that madrassahs have injected uncertainty into the region.

“Will they become [clerics] or will they become terrorists?” asked Chief of the Army Staff Gen Qamar Javed Bajwa in 2017 of the estimated 2.5 million students enrolled at the tens of thousands of madrassahs across Pakistan. 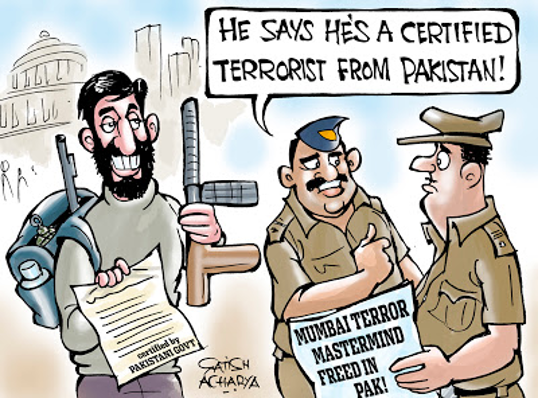 Is America a Failing Democracy

This is hilarious! Pakistanis calling USA a failed state! Indicates the level of delusion in Pakistan! The cartoon below shows the successfully failed state of Pakistan! 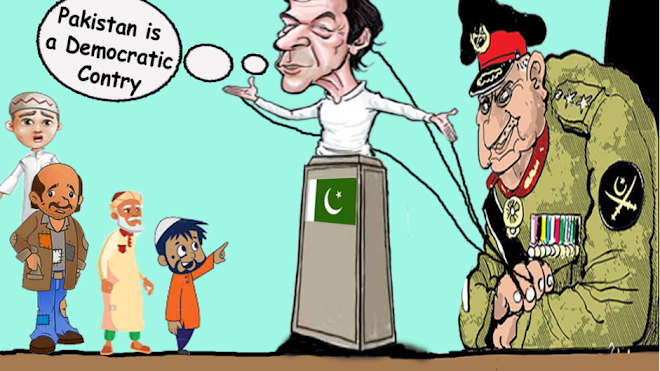 The terms “failing state”, “failed state”, “fragile state” came into use as a result of the analytical work done by economists and other social scientists working in institutions such as the World Bank…. However, the state of political affairs in the United States at the time of this writing and around the time Americans cast votes for those they put in elected offices, some in policy circles had begun to wonder whether the country was heading towards becoming a failed state and a failed democracy. 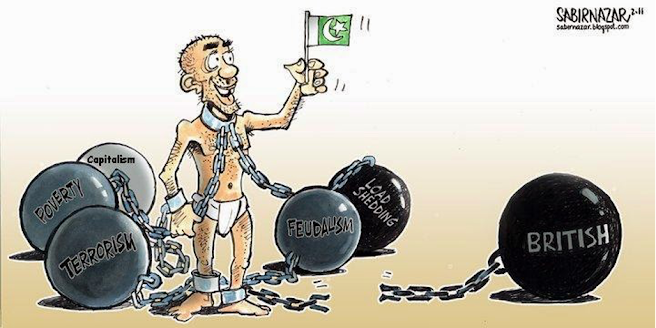 A Case for Cultural Reconstruction.

Pakistan inherited the history of the Indus Valley Civilisation. It has a rich history of great empires and emperors crisscrossing its lands. Today the history it covets due to amnesia induced by societal fracture is that of being an Islamic state and nothing more. A true one-dimensional state which is narrowing itself into a dead end. 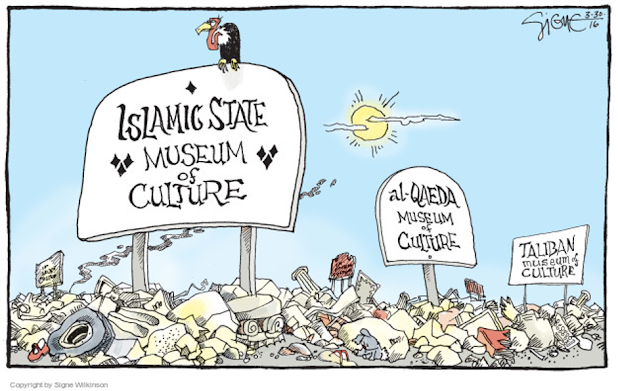 ON Nov 2, 2020, a small ceremony was held at the consulate general of Pakistan in New York City. The occasion was an unusual one: a ceremonial handing over of 45 antiquities recovered by the Manhattan District Attorney’s Office. The artefacts, most of which date from the Gandharan era, were smuggled out of Pakistan.

Indeed, wondering what is going to happen to these artefacts from Gandhara raises the question of what Pakistan is doing with the antiquities that are already present in the country. After all, Pakistan has hardly any museum dedicated to its own history, let alone the history of the Buddhist era and the Gandhara civilisation that predated the advent of Islam.

One of the reasons for this paucity of museum heritage dedicated to national history is because no government has been able to solve the conflict between religious obscurantism and historical reconstruction. The narrow-minded antipathy towards everything and anything that existed in the region prior to the coming of Islam has meant the active destruction of objects that are thousands of years old and represent important bits of the past not just of Pakistani but also of human history.

Any guesses on how the Pakistani woman would be caricatured in 2020? Has she come out of refrigeration in the past decade?

Any society which consigns half its population – its mothers, sisters, and daughters to this fate is really fractured.

In my opinion, it has cemented itself in regression.